Student file of Jefferson Duncan, a member of the Sioux Nation, who entered the school on September 4, 1911 and departed on October 2, 1913. The file contains a student information card, an application for enrollment, a medical/physical records, letters/correspondence, a newspaper clipping, a trade/position record card, financial transactions, and an outing record. The file indicates Duncan was a football player and worked as a second chef on the Chicago, Milwaukee, and Saint Paul railroad dining car during the summer vacation in 1913 and was living in Thunder Hawk, South Dakota in 1913 and 1914. 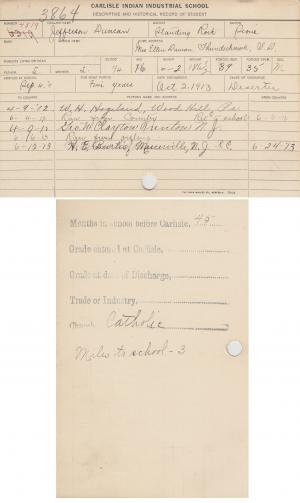