Student file of James Taogoa Kowice, a member of the Pueblo Nation, who entered the school on October 18, 1894 and ultimately departed on June 23, 1909. The student did not attend the school continuously, but left and reentered. The file contains student information cards, a returned student survey, a trade/position card, a former student response postcard, a news clipping, a progress/conduct card, and a report after leaving. The file indicates Kowice was working for a lumber company in Albuquerque, New Mexico in 1910, a farmer in Casa Blanca, New Mexico in 1911 and was working as a storekeeper in Gallup, New Mexico in 1912.

Note: The file indicates that the student first entered the school as James Kary Taogoa with one living parent. When he reentered the school in 1904 both parents were deceased and George Kowice Analla (a former Carlisle student) is listed as his home address. His name is also changed to James Taogoa Kowice.  In George's file, he refers to James as his brother. 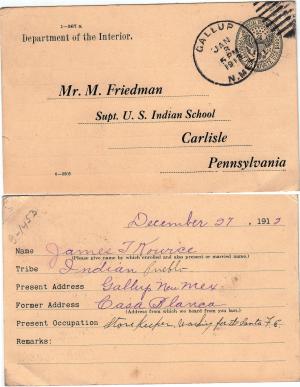