Student file of James McKinley, a member of the Osage Nation, who entered the school on September 30, 1911 and departed on October 2, 1913. The file contains student information cards, financial transactions, correspondence, a former student response postcard, an application for enrollment, a medical/physical record, and a report after leaving indicating McKinley was working in a pool-billiard hall in Hominy, Oklahoma in 1913.

Note: Some of James McKinley's documents were originally found in the folder of another student; Roy D. Harrison, NARA_RG 75_Series 1327_box 82_folder 3870. 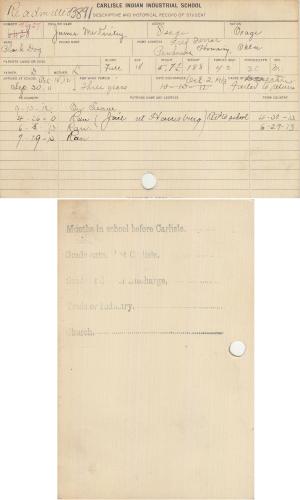