Student file of Hermis Merrivall, a member of the Sioux Nation, who entered the school on September 26, 1912 and ultimately departed on April 28, 1915. The student did not attend the school continuously, but left and reentered. The file contains a student information card, an application for enrollment, a medical/physical record, financial transactions, and letters/correspondence that indicate Merrivall was in Harrisburg, Pennsylvania on his way to Pine Ridge, South Dakota in 1915.

Note: One of Hermis Merrivall's documents was originally found in the folder of another student; William Martineau, NARA_RG 75_Series 1327_box 83_folder 3894.

Note: At the time of scanning at the U.S. National Archives, several documents in this student file seemed to relate to a different student, Kiva Merrival. Those documents have now been included in the Kiva Merrival file: NARA_RG 75_Series 1327_box 102_folder 4399. 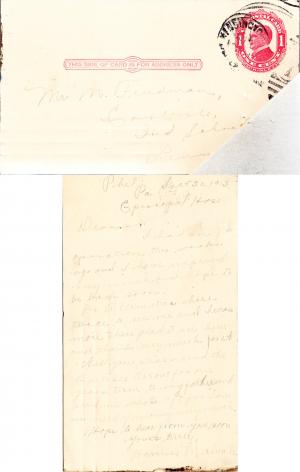