Student file of Henry W. Smith, a member of the Oneida Nation, who entered the school on August 16, 1889, and departed on September 26, 1894. The file contains a student information card, a former student response postcard, a newspaper clipping, a trade/position record, a returned student survey, letters/correspondence, a progress/conduct card, and a report after leaving indicating that Smith was farming in West De Pere, Wisconsin in 1914.

Note: Some of Henry W. Smith's documents were originally found in the folder of another student; Milton Smith, NARA_RG 75_Series 1327_box 23_folder 1058.

Note: At the time of scanning at the U.S. National Archives, several documents in this student file seemed to related to a different student, also named Henry Smith. Those documents have now been included with the Henry Smith file: NARA_RG75_Series 1327_box 153_folder 5990. 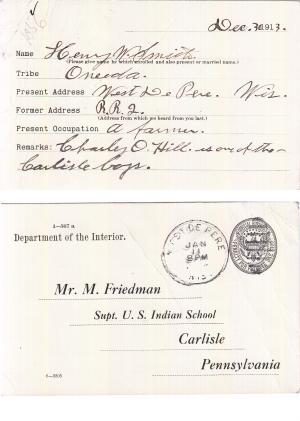