Student file of George Whitefox (Otter goes a long way), a member of the Crow Nation, who entered the school on August 22, 1906 and ultimately departed on December 31, 1912. The student did not attend the school continuously, but left and reentered. The file contains student information cards, an outing record, medical/physical records, correspondence, a trade/position record card, applications for enrollment, a progress/conduct card, and financial transactions. The records indicate that Whitefox left Carlisle to enlist in the Navy.

Note: A document related to George Whitefox was originally found in the folder of another student; George M. White, NARA_RG 75_Series 1327_box 112_folder 4645.

Note: These documents were found in the same folder as documents related to another student; Lucy Smith. 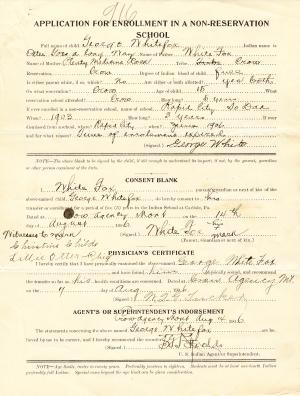