Student file of George Pike, a member of the Creek Nation, who entered the school on January 19, 1914 and departed on July 21, 1915. The file contains a student information card, financial transactions, correspondence, a federal financial aid form, a medical/physical record, and a progress/conduct card. The file indicates Pike attended the Millersville State Normal School as a part of the outing program, was living in Broken Arrow, Oklahoma in 1915, and was an interpreter in Muskogee, Oklahoma in 1916.

Note: At the time of scanning at the U.S. National Archives, several documents in this student file seemed to relate to a different student, George M. White. Those documents have now been included with the George M. White file: NARA_RG 75_Series 1327_box 112_folder 4645. 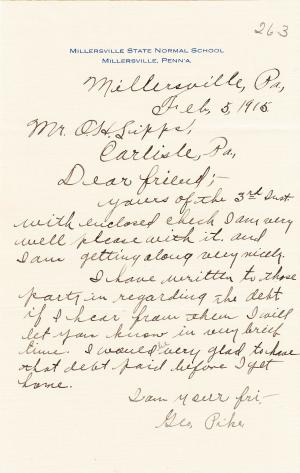