Student file of George Nash, a member of the Winnebago Nation, who entered the school on September 20, 1911 and ultimately departed on September 25, 1917. The student did not attend the school continuously, but left and reentered. The file contains student information cards, applications for enrollment, medical/physical records, a trade/position record card, financial transactions, and a report after leaving indicating that Nash was farming and working in a print shop in Thurston, Nebraska in 1915. The file also contains correspondence regarding Nash's family, his time at the Ford Motor Company in Detroit, Michigan, and his enrollment in night courses at Michigan State Auto School.

Note: One of George Nash's documents was originally found in the folder of another student; Charles Kelsey, NARA_RG 75_Series 1327_box 90_folder 4091. 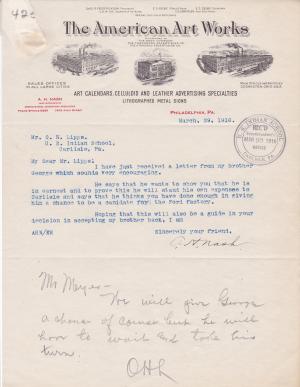