Student file of Fred Walker, a member of the Omaha Nation, who entered the school on September 17, 1908 and ultimately departed on June 9, 1918. The student did not attend the school continuously, but left and reentered. The file contains student information cards, a trade/position record card, medical/physical records, applications for enrollment, a progress/conduct card, an outing record, certificates of promotion, a returned student survey, financial transactions, and letters/correspondence. The file indicates Walker worked at the American Iron and Steel Co. in Lebanon, Pennsylvania in 1916.

Note: One of Fred Walker's documents was originally found in the folder of another student; William Joseph Thayer, NARA_RG 75_Series 1327_box 142_folder 5583. 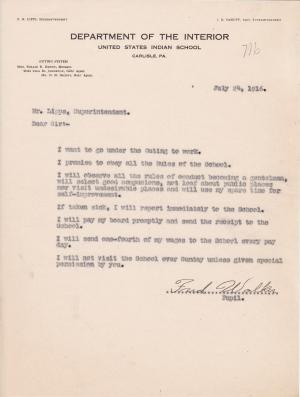