Student file of Frank Vedernack, a member of the Chippewa Nation, who entered the school on September 1, 1909 an ultimately departed on May 18, 1912. The student did not attend the school continuously, but left and reentered. The file contains student information cards, financial transactions, letters/correspondence, a trade/position record card, a former student response postcard, medical/physical records, an outing evaluation, an application for enrollment, a progress/conduct card, an outing record, and a report after leaving.

The file indicates Vedernack was living in Odanah, Wisconsin in 1914, living in Pitcairn, Pennsylvania in 1915, and was a corporal in the American Expeditionary Force stationed at Co. B. 327 Infantry about to ship for France during World War I.

Note: In this file, the student's last name is variously spelled Vetternack, Vatternack, Vetterneck, and Vadernack, but family have indicated that Vedernack is the correct spelling. 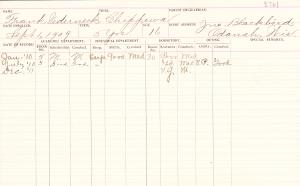