Student file of Frank Marques, a member of the Pueblo Nation, who entered the school on September 26, 1908 and departed on August 26, 1913. The file contains a student information card, medical/physical records, an application for enrollment, former student response postcards, financial transactions, a progress/conduct card, letters/correspondence, a trade/position record card, outing records, and a report after leaving indicating Marques was working as a machinist in Albany, New York in 1912 and 1914 and a mechanical engineer in Albany, New York in 1915. 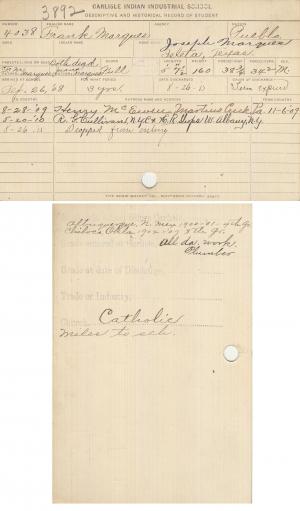