Student file of Frank Kowuni, a member of the Pueblo Nation, who entered the school on November 28, 1911 and departed on October 2, 1916. The file contains correspondence, a student information card, an application for enrollment, medical/physical records, outing evaluations, a federal financial aid form, outing records, and financial transactions. The file indicates Koyona was living in Casa Blanco, New Mexico in 1916 and was working at Electric Light and Ice Plant Power Co. in Winslow, Arizona in 1916 and 1917.

Note: A document of Frank Kowuni's was originally found in the folder of another student; Frank Kabogun, NARA_RG 75_Series 1327_box 111_folder 4619. 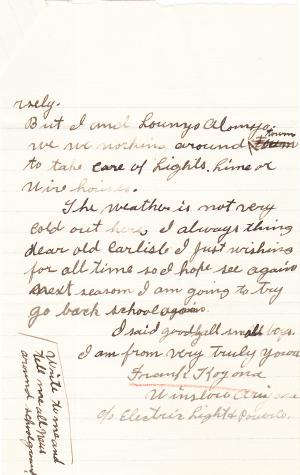