Student file of Francis Mora, a member of the Chitimacha Nation, who entered the school on August 2, 1906. No departure date is given. The file contains a progress/conduct card, an application for enrollment, outing evaluations, a report after leaving, an outing record, and a former student response postcard indicating Mora was a farmer in Charenton, Louisiana in 1914. 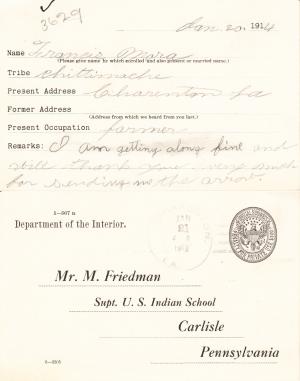