Student information card of Emanuel Powless, a member of the Oneida Nation, who entered the school on August 30, 1889 and departed on March 12, 1900. The file indicates Powless was married and living in West De Pere, Wisconsin 1913.

Note: In various school documents, this student is referred to by the given names Emanuel and Emmanuel, and by the surnames Powless, Powles, Powlass, and Powlas. A family memeber has indicated that Powless is the correct spelling. 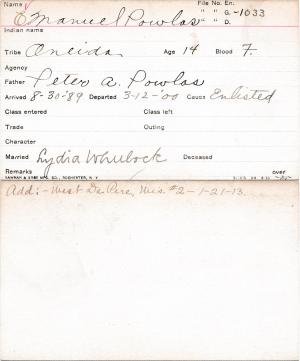