Student file of Elizabeth Skenandore, a member of the Oneida Nation, who entered the school on September 15, 1915. No departure date is given. The file contains student information cards, applications for enrollment, correspondence, an outing evaluation, an outing record, and certificates of promotion. The file contains several letters discussing sending Elizabeth and her sister, Madeline, home after the school closes, instead of sending them to a different Indian school in the west. 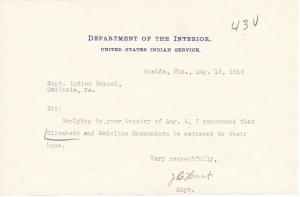