Student file of Edward Peters, a member of the Chippewa Nation, who entered the school on August 7, 1889, graduated in 1899, and ultimately departed on August 7, 1899. The student did not attend the school continuously, but left and reentered. The file contains a news clipping, student information cards, a returned student survey, a former student response postcard, a trade/position record, letters/correspondence about his daughter and other students he recommended to attend Carlisle, and a report after leaving. The file indicates Peters was a farmer and barber in Rose Bush, South Dakota in 1907 and working as a fireman and engineer in Mt. Pleasant, Michigan in 1911. 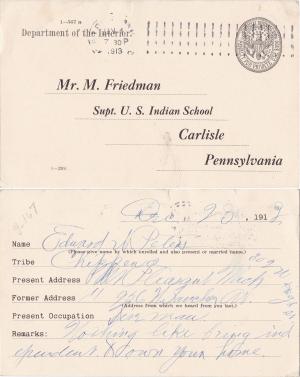