Student file of Donald McDowell, a member of the Lummi Nation, who entered the school on September 29, 1915 and departed on October 10, 1916. The file contains medical/physical records, a student information card, an application for enrollment, a financial transaction, and correspondence. The file indicates McDowell was living in Salamanca, New York in 1916 and 1918.

Note: A document of Donald McDowell was originally found in the folder of another student; Thomas Sawatis, NARA_RG 75_Series 1327_box 125_folder 4987. 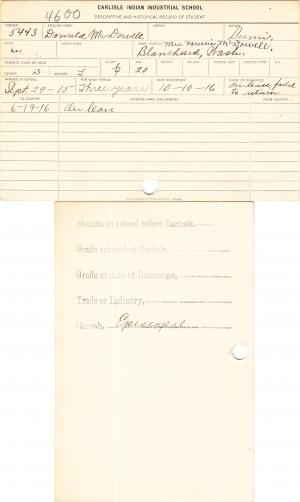