Student file of DeForest Doxtator, a member of the Seneca Nation, who entered the school on January 20, 1909 and departed on July 2, 1912. The file contains a student information card, physical records, an application for enrollment, a conduct card, an outing record, financial transactions, outing evaluations, and correspondence. The files indicate that after leaving the school Doxtator was living in Salamanca, New York. 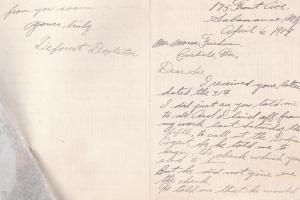