Student file of David Thompson, a member of the Eastern Band of Cherokee, who entered the school on December 2, 1911 and departed on August 13, 1917. A note in the file says he re-enrolled on October 14, 1917, but no final departure date is given. The file contains student information cards, applications for enrollment, an outing evaluation, outing records, a medical/physical record, a certificate of promotion, a progress/conduct card, financial transactions, and correspondence. The file indicates Thompson was a member of the U.S. Army in Co. 4, 1st Training Battalion stationed at Camp Lee in Petersburg, Virginia. 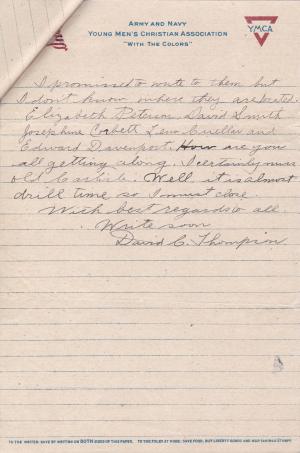