Student file of David Bruner Anderson, a member of the Creek Nation, who entered the school on September 18, 1913 and ultimately departed on September 7, 1916. The student did not attend the school continuously, but left and reentered.The file contains student information cards, an application for enrollment, medical/physical records, financial transactions, and letters/correspondence. The file indicates Anderson was living in Sapulpa, Oklahoma in 1916 and 1917 and was a Sergeant stationed in Camp Greene, Charlotte, North Carolina in 1918. 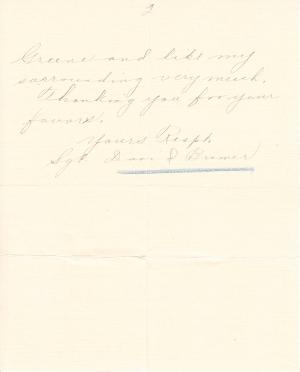