Student file of Cornelia Belle Eastman, a member of the Sioux Nation, who entered the school on September 6, 1912, and departed on October 19, 1915. A note in the file says she re-enrolled on January 8, 1916 but no final departure date is given. The file contains student information cards, an outing record, a federal financial aid form, an outing evaluation, correspondence, financial transactions, certificates of promotion, and an application for enrollment. The file indicates that Eastman was living in Washington D. C. in 1922 and had applied to enter a training school for nurses in Maryland.

Note: A document of Cornelia Eastman's file was originally found in the file of another student; Bessie C. Eastman, NARA_RG 75_Series 1327_box 103_folder 4427. 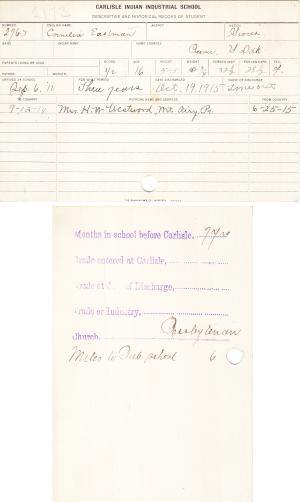