Student file of Chauncey Williams, a member of the Sioux Nation, who entered the school on October 8, 1912 and ultimately departed on April 4, 1916. The student did not attend the school continuously, but left and reentered. The file contains student information cards, an application for enrollment, financial transactions, a former student response postcard, a report after leaving, medical/physical records, and letters/correspondence. The file indicates that Williams was working as a rancher in Isabel, South Dakota in 1914 and was living in Eagle Butte, South Dakota in 1916.

Note: At the of scanning at the U.S. National Archives, a document in this student file seemed to relate to a different student, Ruth Jacobs. That document has now been included with the Ruth Jacobs file: NARA_RG 75_Series 1327_box 105_folder 4478. 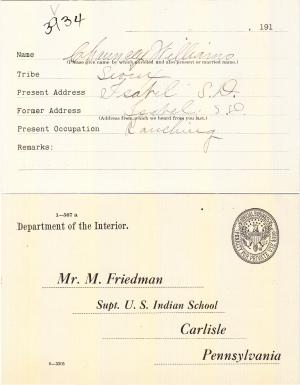