Student file of Chauncey Archiquette, a member of the Oneida Nation, who entered the school on September 21, 1890, graduated in 1899,  and ultimately departed on March 6, 1899. The student did not attend the school continuously, but left and reentered. The file contains student information cards, a former student response postcard, returned student surveys, and a report after leaving. The file indicates Archiquette attended the Haskell Institute in Lawrence, Kansas in 1902, was an assistant clerk at the Carlisle Indian School in Carlisle, Pennsylvania in 1905 and 1906, and was a clerk in Pawhuska, Oklahoma from 1907 to 1911.

Note: A document of Chauncey Archiquette's was originally found in the folder of another student; Annie Kowuni, NARA_RG 75_Series 1327_box 135_folder 5324. 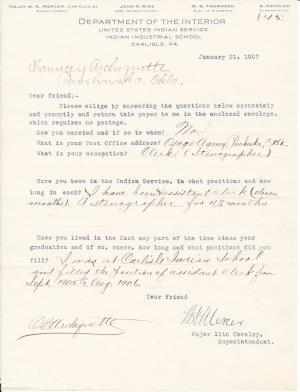