Student file of Celicia Wheelock, a member of the Oneida Nation who entered the school on March 23, 1888 and departed on January 16, 1893. The file contains a student information card, a returned student survey, a trade/position record card, and a report after leaving indicating Wheelock was working as a housekeeper in Oneida, Wisconsin in 1910.

Note: A document of Celicia Wheelock's was originally found in the folder of another student with the same name, Cecelia Wheelock, NARA_RG 75_Series 1327_box 76_folder 3698. 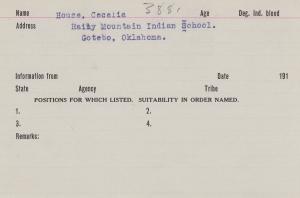