Student file of Calvin Lamoureaux, a member of the Sioux Nation, who entered the school on October 8, 1911 and departed on November 26, 1915. The file contains an application for enrollment, a student information card, an outing evaluation, an outing record, and letters/correspondence that indicate Lamomeaux was a student at the Baptist College in Grand Island, Nebraska in 1916 and 1917.

Note: the student in this is identified as Calvin J. Lamomeaux and Calvin Lamoureaux.

Note: Some of Calvin J. Lamomeaux's documents were originally found in the folder of another student; Hannah Kennedy, NARA_RG 75_series 1327_box 92_folder 4123. 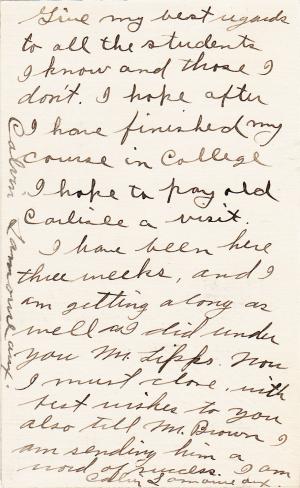