Student file of Peter J. Jordan, a member of the Chippewa Nation, who entered the school on September 7, 1907 and ultimately departed on June 22, 1914. The student did not attend the school continuously, but left and reentered. The file contains photographs, a returned student survey, an application for enrollment, student information cards, a medical/physical record, financial transactions, and correspondence. The file indicates Jordan played football and baseball at Carlisle, was the Captain of Company A at Carlisle, and had enrolled at the Keewatin Academy in Villa Louis, Prairie du Chien, Wisconsin in 1914.

Note: Some of Peter J. Jordan's documents were originally found filed at the U.S. National Archives in the folder of another student; Peter Jordan, RG 75_Series 1327_box 22_folder 1005.

Note: In this file there is also an application for a coal mining lease covering Navajo tribal lands from L. A. Myers on November 20, 1937. 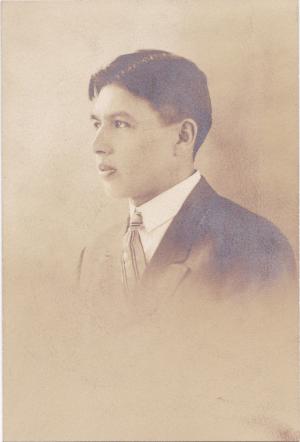