Wilson L. Gill's Opportunity to Demonstrate his Method of Civil and Moral Instruction

Commissioner of Indian Affairs Cato Sells informs Wilson L. Gill, of the American Patriotic League, that he will appoint him Supervisor of Indian Schools at the Rapid City Indian School to test Gill's new plan for "civic and moral training."

Gill expresses his frustration with Sells because Sells has declined to let Gill demonstrate his "reform method of handling Indian children in the Government schools" at the Carlisle Indian School, as Rapid City, SD is too far for Sells to come see Gill demonstrate his methods. 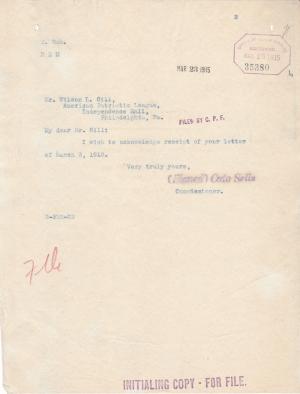