Richard Henry Pratt informs the Office of Indian Affairs that none of the party of seven students from Red Lake have arrived, but the one from the White Earth Agency who was to accompany them has arrived at Carlisle. Pratt further states that this student, upon his medical examination, was found unfit. As a result the reliance upon the agenies to select and send students should be abandoned and Pratt recommends that an agent of the school should be sent to San Carlos to recruit the 50 Apache students.

Note: The student referred to here, although not named, is William Lufkins. 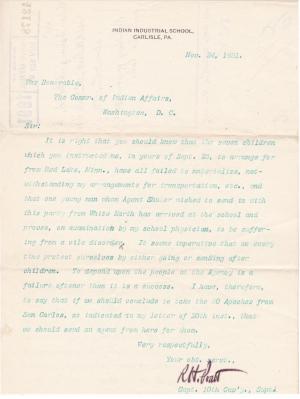