Response to Standing being Placed in Charge of Chicago Exhibit

Richard Henry Pratt responds to an Office of Indian Affairs letter regarding placing Alfred John Standing in charge of the building in Chicago. Pratt approves of the placement but notes that he does not agree with his salary being taken out of his funding during this period. He further asks for an increase in the daily allowance and the ability for him to select his own helpers. 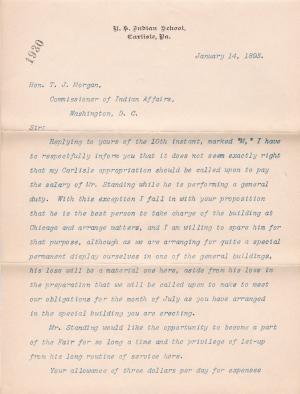