Richard Henry Pratt responds to an Office of Indian Affairs that he has received a letter from David S. Keck, U.S. Supervisor, that he has orders to bring 100 students to Carlisle and that some of them have never attended school. Pratt notes that Keck's orders would completely cover the incoming class of students and that it would be contrary to prior instructions from the Department. As a result, Pratt requests that Keck's orders be withdrawn with the exception of a few worthy students. 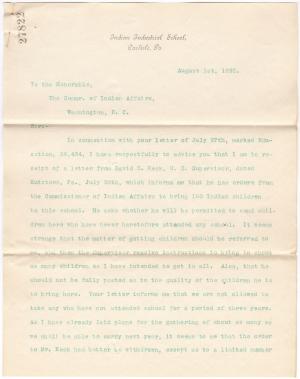