Richard Henry Pratt forwards to the Commissioner of Indian Affairs a letter, penned by James E. Rhodes of Germantown, Pennsylvania. Rhodes asks if the son of one of his Seneca friends, John Kennedy, might be allowed to enroll at Carlisle. Pratt notes that he is willing to accept the boy, if the Commissioner approves. 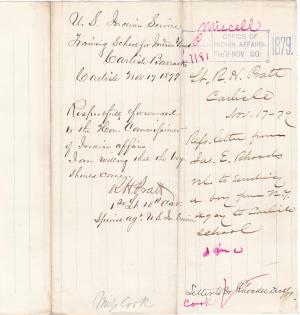