Pratt Responds to Request for Return of William and Sarah Archiquette

Richard Henry Pratt responds to a letter from S. S. Burleson requesting the return of William and Sarah Archiquette at the request of their mother. Pratt notes that he would like the statements in the letter verified as he includes two enclosures including a letter from William showing that he is content on his outing. Further as the students transferred from Martinsburg they were eligible to return home last year and this year but choose to remain at Carlisle and go on outing. He ends by noting that he is not opposed to them returning at the end of their outing if the Office thinks that is best. 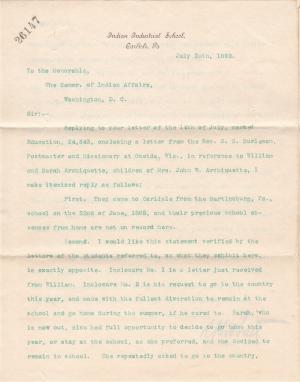