Pratt Responds to List of Children from Flambeau and La Pointe

Richard Henry Pratt responds to an Office of Indian Affairs letter regarding a list of children from Supervisor T. S. Ansley covering children from the Flambeau and La Pointe Agencies. Pratt notes that he has no objection to receiving students with no prior education in order to keep up enrollment at Carlisle until the new plan of grades and promotions is developed. However, Pratt asks to send his own physician in order to screen the students in the interests of the school.

Pratt ends by noting that he does not want the students from Cour-de-Oreillas and that developing lists of children and forwarding them are two different matters and that he has little expectation the students will be sent from these lists. 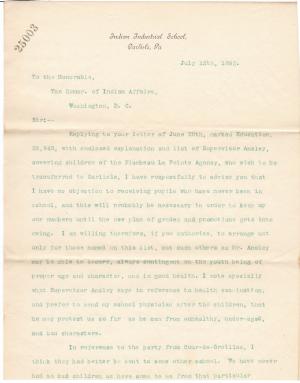