Signed request of Joseph Saunooke to participate in the outing program at the Carlisle Indian School along with a copy of the outing rules signed by Saunooke, Richard Henry Pratt, and William Balderston. Also included is a notice to Balderston from Richard Henry Pratt that Saunooke had enough money for the ticket so there is no need to pay for his ticket. 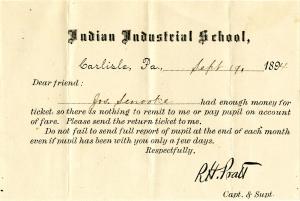