Letter from Richard Henry Pratt to Commissioner of Indian Affairs Ezra Hayt, acknowledging receipt of change orders allowing Pratt to remain in the East at the Carlisle Indian School. Pratt also apologizes for troubles during his recent trip to Wichita, and suggests that better planning be made for subsequent recruitment trips. Student discontent with lack of supplies, specifically clothing for the boys, is discussed, and a postscript notes that a dozen Cheyenne girls at their agency are ready to be transported to the Hampton Institute. 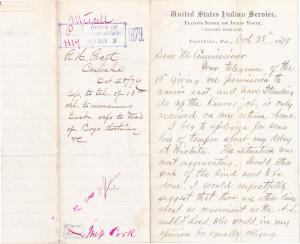