Superintendent Richard Henry Pratt writes to Doctor Cornelius Rea Agnew in response to a proposed plan to segregate the students after they left the school.  He states that the students are fully capable of becoming a part of American life and appeared wary of what he perceives as attempts to undermine the school's work.  Pratt also discusses the appropriation of the Hallock tract of land.  This letter is part of a series of related correspondence which can be found using the People tags.  Transcript included. 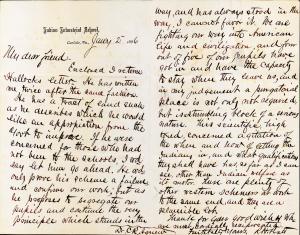