Major William A. Mercer endorses John L. Walters' request to be transferred back from disciplinarian to teacher. To fill the disciplinarian role vacated by Walters and the assistant matron role vacated by Elizabeth C. Sloan, who has been on unpaid sick leave, requests to hire Mr. Harry M. Carter and Mrs. A. B. Carter, who fill the same positions at the Cherokee school and desire a transfer. As the disciplinarian, Mr. Carter would take charge of the large boys (15+), and as the assistant matron, Mrs. Carter would be responsible for the small boys (6-15).

Sloan resigns from her position, and Commissioner of Indian Affairs F. E. Leupp orders the transfer of Mr. and Mrs. Carter to Carlisle. 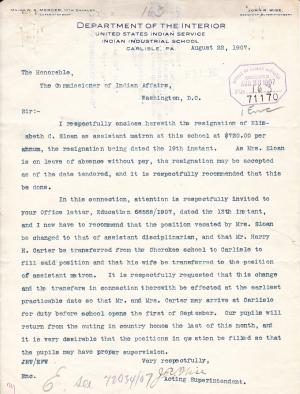