Filming of the Carlisle Indian School by Gaumont Company

These materials include correspondence between the Gaumont Company and the Bureau of Indian Affairs about filming done at the Carlisle Indian School. The correspondence mostly discusses a complimentary roll of the film that was provided to the Bureau. The filming reportedly included shots of Carlisle's three athletes selected to participate in the Stockholm Olympics, as well as a female student "in costume" singing "Nearer My God to Thee" in sign language.

Note: The film referenced in this letter has not been located. 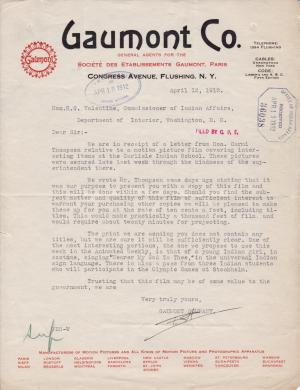