The Chicago and North Western Railway Company writes to the Indian Office requesting that a $30 train ticket be paid for. Second Assistant Commissioner of Indian Affairs C. F. Hauke informs Supervisor in Charge Oscar H. Lipps, who told CNWRC to write to the Indian Office, that they have no record of the claim.

General Agent of The North Western Line returns a $30 voucher to Lipps because they received a check from the Treasury Department to pay for the ticket. Lipps informs the Commissioner that the North Western Company has received the check. 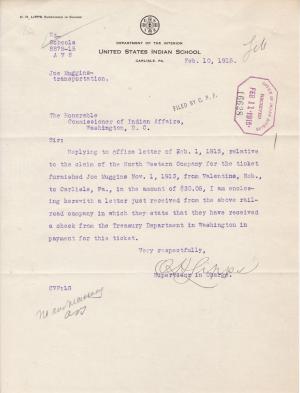