Desire to Fill Quota for Indian Students at Hampton Institute

Samuel C. Armstrong informs Acting Commissioner of Indian Affairs E. M. Marble that Richard Henry Pratt is likely not bringing any new students to fill the quota of 68 Indian students at Hampton Institute. Armstrong continues to say that Lieutenant Brown at Yankton Agency knows of many Indian youth that would like to come to Hampton and could fill the quota. 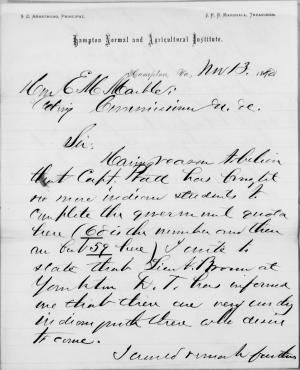