Descriptive Statements of Changes in School Employees and Resignation, November 1902

Lt. Colonel Richard H. Pratt submits a report that lists employees who have left the school (Joseph N. Jordan, Amos R. Frank, and S. Kendall Paul), those who have changed positions (Minnie L. Ferree), and a new employee (Mabel B. Sherry). These reports include personal information about those being hired as well as reasons for departure for those leaving. Pratt also sends a resignation letter from Jordan. 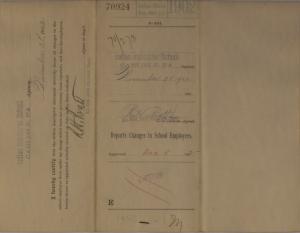