Correspondence About The World In Boston Exhibition

This material includes correspondence between Superintendent Moses Friedman and the Commissioner of Indian Affairs concerning "The World in Boston" exhibit. Five Carlisle students, including four men and one woman, took part in the weeks-long exhibit. The correspondence includes a letter of thanks from the organizer of the American Indian Section of the exhibit, and discussions between school and federal officials over how government-run schools were being depicted in the exhibits.ols at "The World in Boston" exhibit. 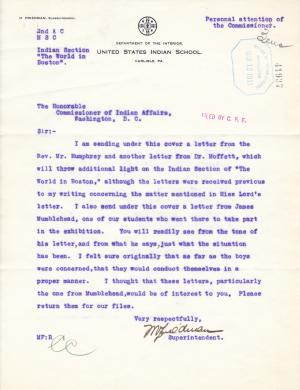