Student file of William Earth (Waweacomig), a member of the Chippewa Nation, who entered the school on October 11, 1912 and departed on June 12, 1917. The file contains applications for enrollment, student information cards, medical/physical records, outing evaluations, financial transactions, outing records, and correspondence indicating that he was in Naytahwaush, Minnesota in August 1917 helping his father.

Note: In this file the student's name also appears as William Waweacomig and William Weacomig. 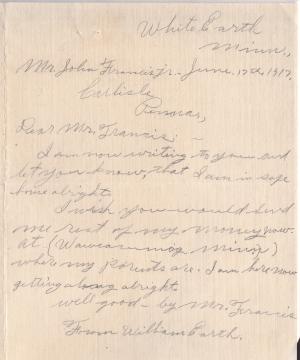