Student file of Walter O. Hunt (Ah-sah-ah-le), a member of the Pawnee Nation, who entered the school on December 14, 1904 and departed on January 26, 1910. The file contains a student information card, a news clipping, a medical/physical record, an outing record, a progress/conduct card, and a report after leaving indicating that in 1910 Hunt was living in Pawnee, Oklahoma. 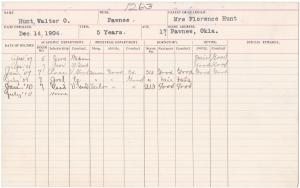