Student file of Thomas St. Germaine, a member of the Chippewa Nation, who entered the school on September 10, 1909 and ultimately departed on October 7, 1910. The student did not attend the school continuously, but left and reentered. The file contains a photograph, news clippings, student information cards, a medical/physical records, letters/correspondence, a progress/conduct card, and a report after leaving.

The file indicates St. Germaine was a football player while at Carlisle. After leaving the school he was appointed as an assistant messenger with the duties of a stenographer for the Department of the Interior in Washington, D. C. in 1910 and worked as a clerk in Pawhuska, Oklahoma in 1911. He was later hired to coach at Villanova University and then at Yale University. He graduated from Yale University with a Bachelor of Laws in 1913 and was working as a tutor in New Haven, Connecticut in 1914. 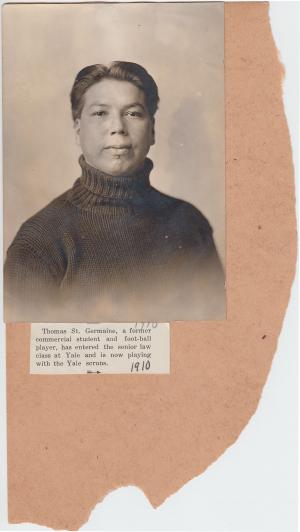