Student file of Thomas Blackbear, a member of the Sioux Nation, who entered the school on October 10, 1886, graduated in 1894, and departed on March 5, 1894. The file contains a student information card, former student response postcards, a returned student survey, and a report after leaving. The file indicates Blackbear was the General Secretary of the Christian Unity Society in 1907 and stock raising and farming in Porcupine, South Dakota in 1907 and 1913.

Note: In the file the student is referred to as Thomas Blackbear and Tommy Blackbear.

Note: A document related to Thomas Blackbear was originally found in the folder of another student; Thomas Black Bull, NARA_RG 75_Series 1327_box 38_folder 1832. 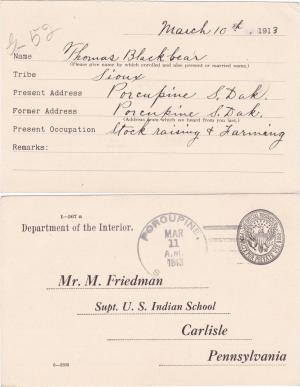