Student file of Stuart Hazlett, a member of the Piegan Nation, who entered the school on November 20, 1894, graduated in 1899, and departed on March 6, 1899. The file contains a student information card, letters/correspondence, a trade/position record card, returned student surveys, former student response postcards, and a report after leaving. The file indicates Hazlett attended Wilson's Modern Business College in Seattle, Washington in 1908, was an Indian employment overseer in Browning, Montana in 1910 and 1911, and was ranching in Browning, Montana from 1912 to 1914.

Note: In this file the student is referred to as Stuart Hazlett and Stewart Hazlett. 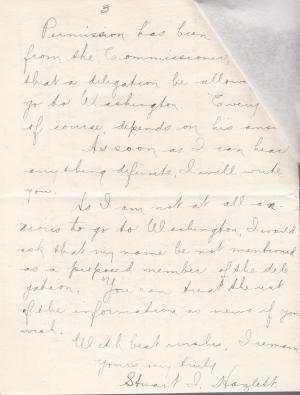