Student file of Rufus Youngbird, a member of the Eastern Band of Cherokee, who entered the school on July 6, 1903, and ultimately departed on May 9, 1913. The student did not attend the school continuously, but left and reentered. The file contains student information cards, newspaper clippings, former student response postcards, outing records, medical/physical records, correspondence, a progress/conduct card, a returned student survey, applications for enrollment, and a report after leaving.

Note: in this file the student is identified as Rufus Youngbird and Rufus Young. 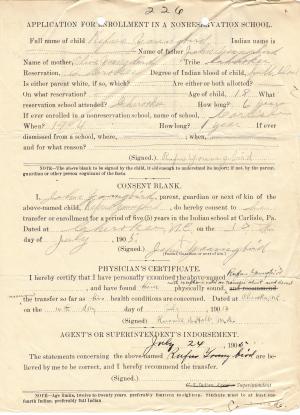