Student file of Roy Smith, a member of the Ute Nation, who entered the school on August 13, 1901, and departed on March 21, 1905. The file contains a student information card, a report after leaving, a news clipping, a former student response postcard, and returned student surveys from two different years. The later survey indicates that Smith was working as a rancher in White Rocks, Utah in 1913. 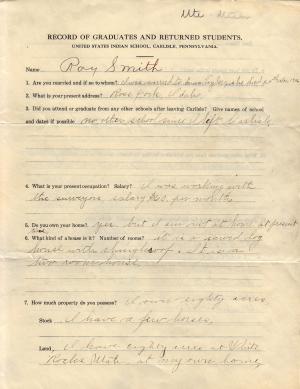