Student file of Louis Thomas, a member of the Mohawk Nation, who entered the school on August 30, 1899 and departed June 24, 1904. The file contains a report after leaving indicating that Thompson was a laborer in Hogansburg, New York in 1911.

Note: The name was incorrectly listed as Thompson.

Note: This file originally contained a progress card for another student named Louis Thompson (Ah Lee). The card has since been moved to the correct file; NARA_1327_b 79_folder 3775. 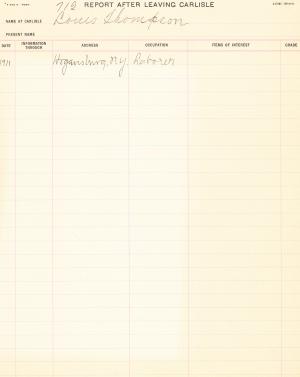